Because I’ve not yet been invited to any Author Interviews in blogs… at least not that I know of, I decided to do an interview with myself as if done by relevant blogging sites who are free to re-blog this post at their heart’s desire…

Tell us about yourself?

As you’ve guessed my name is Nathalie M.L Römer (with an umlaut in it if you need to search for my books). I was born and raised in Amsterdam until I moved to the Caribbean to live on Curaçao, and when I reached adult life I moved to Britain, before moving to Sweden in early 2015. I live there with my partner of many years in a small town called Gusselby.

What are your ambitions for your writing career?

I only really started to write in 2014 in a serious way, and then full-time in mid-2015, but already I’ve got big plans for myself, such as finishing my epic fantasy series The Wolf Riders of Keldarra this year, of which the first book Book 1: The 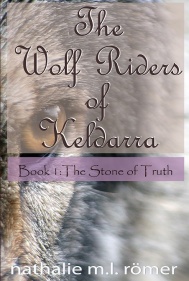 Stone of Truth was released this year. I already have a heavy schedule of plots to sort out, which is now made easier after watching a video by Joanna Penn about Scrivener. (Thanks Joanna..)

Before I embarked on writing for a career I was a serial post writer on the World of Warcraft official forums, where often my posts would 400-500 words long, so I am quite used to writing… a lot!

So in a short paragraph I’d say: expect plenty from me.

There was an error retrieving images from Instagram. An attempt will be remade in a few minutes.

Nathalie M.L. Römer is an author based in Gusselby, Sweden. She lives here with her partner Anders. Before this, she lived for over two decades in Britain. She was born and initially raised in the Netherlands, and later also lived in Curaçao. Nathalie considers herself a multi-genre author, publishing them under her imprint Emerentsia Publications she co-owns with her partner. Nathalie writes primarily science fiction, fantasy, mystery, and romance, and she's working on books in other genres that interest her. Her Facebook page is the best place to keep updated on the latest developments relating to Nathalie's writing efforts.